I am a furniture and panel gilder, with a background in bookbinding. When I first saw someone using a gilding screen frame for book edge gilding about ten years ago, I knew it would be a great tool for my work as well. 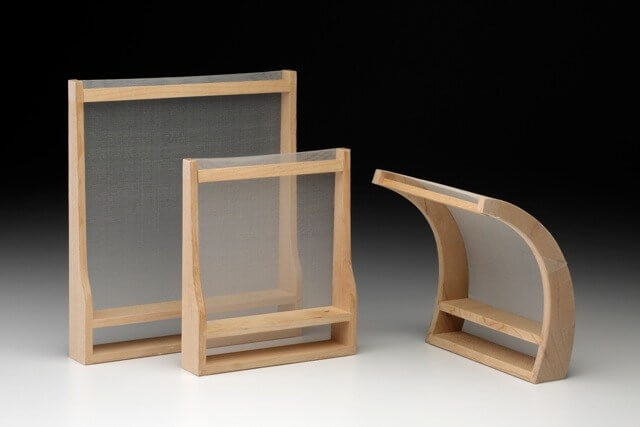 Most people do not know about this incredibly practical tool, but once I learned how to make one it became indispensable in my studio. I always provide a gilding screen frame in my student’s tool kit when I teach gilding, and when I attend conferences or conduct workshops people invariably approach and ask “What is this thing?”

In an effort to answer that question and to share what has been shared with me, I am offering this explanation of the frame and its history, how to use it, and how to make one of your own.

What is a gilding screen?

A gilding screen frame is a tool that allows a gilder to temporarily attach a piece of leaf—whole or cut—to silk so it can be easily transferred to the object to be gilded. It is particularly useful on flat or broad cover surfaces. But this is the best part: because the leaf lays smooth and flat on the translucent silk it is easy to sight for accurate placement onto the surface being gilt. If a gilder has multiple screens you can ‘load’ the screens with leaf and have them ready for laying pieces in succession quickly and accurately. The screen can be used for traditional water gilding and glass gilding. Though I haven’t used it on oil or water-based size gilding, I have heard of others who have had success with this as well.

Click the tabs above to learn more about the gilding screen’s history, use, and how to make your own.

Visit the Studio Intensives section of my website for information on Independent Studies in Water Gilding and Water Gilding Workshops.

Sarah Pringle, 2015. An edited version of this post is in the Society of Gilders journal publication The Gilders Tip, Volume 29 No. 1, Winter 2015.

Acknowledgements: I would like to thank Urban J. Billmeier for information on current use of the screen in manufacturing; Dan Grenier, furniture maker, for help with the frames-making portion of this article; Nick Rege-Colt and Mason Rapport for the drawing of the screen frame; John Polak Photography for the current images of the screens; Peter Geraty, binder and teacher, for introducing me to screen frames; Celia Jeffries for her editing expertise; and The Society of Gilders for its support and promotion of education in the gilding arts.

There is a bit of a mystery as to the exact origin of this tool.

Urban J. Billmeier of W&B Gold Leaf, LLC, manufacturers of Wehrung & Billmeier products told me they have used the gilding frame in their business since they started making roll gold about 1910. W.H. Coe Mfg. Co. patented the process in the 1890’s. When their patent ran out W&B began production of roll gold and employed Gold Beaters who had moved from eastern U.S. companies and brought the gilding frame process with them. Billmeier pointed out that although W&B may have made many improvements to the production of roll gold over the years, they have never stopped using the gilding screen.

The gilding screen is used to transfer whole leaf from the book, or beating mold directly onto the roll paper. Urban J. outlines several steps, which vary according to the paper being used. First, glycerin is applied to the gilding screen silk in a small line along the right side of the silk to pick up the leading edge of the leaf. The screen is then held with both hands and gently lowered onto the leaf using a slight amount of pressure to focus the glycerin on the leaf. The leaf is then raised and transferred in a continuous motion from left to right and down onto the paper. As the leaf is being set into the proper position the Spooler [person making roll gold] blows downward on the leaf. This both releases the leaf from the lace and sets it into place. It requires a level of dexterity, practice, and patience for the Spooler to place leaf exactly. This, in most cases, is exactly 1/8 inch from the edge of the roll paper. Each leaf overlaps the previously positioned leaf by exactly 1/16 inch.

Billmeier says the gilding screen is a subtle tool that allows the Spooler to pick up a whole leaf without damaging it, and allows her to place the leaf exactly where desired by viewing the surface and the leaf simultaneously through the silk.

Another reference to the use of a screen frame is in J.A. Wilson’s book Modern Practice in Leather Manufacture(1). Mr. Wilson acknowledges the work of Dr. Henry Rose, of Allied Kid Co. in Delaware, who received a patent on a frame for such use in the 1930’s. Fig. 1, 2 and 3 [from Wilson’s book] show the frames in use in the ‘leaf-laying rooms’ where gold and silver (actually aluminum) leathers were made at Allied Kid Co. in the mid 20th century. 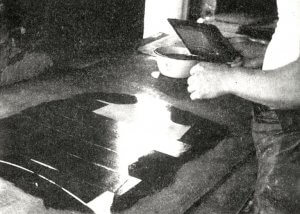 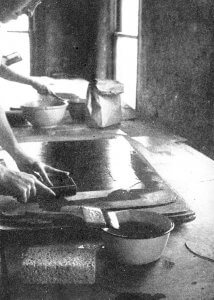 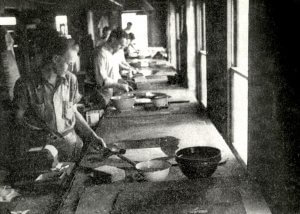 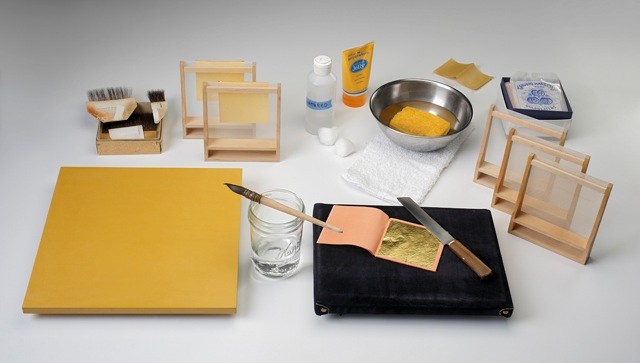 To Clean and Store a Screen

Generally I clean screens after the leaf laying part of a project is completed. Lightly dampen a cotton ball with alcohol (or the solvent for the type of size you are using) and gently rub the silk back and forth to clean. Repeat until the cotton is clean. Let the silk dry. When not in use store the tension stick in the bottom of the screen and keep screens away from heat and sunlight so the silk doesn’t degrade. 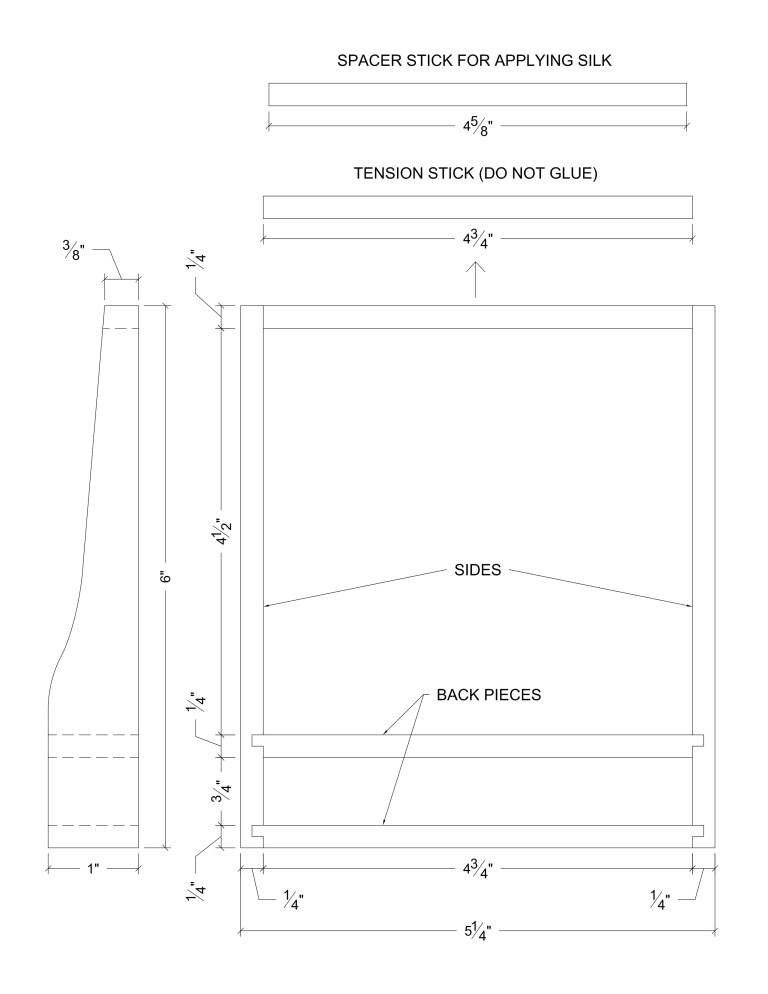 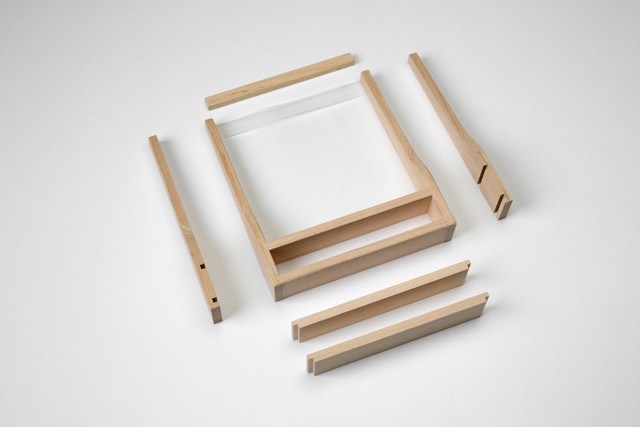 We use cookies on our website to give you the most relevant experience by remembering your preferences and repeat visits. By clicking “Accept”, you consent to the use of ALL the cookies.
Do not sell my personal information.
Cookie SettingsAccept
Manage consent

This website uses cookies to improve your experience while you navigate through the website. Out of these, the cookies that are categorized as necessary are stored on your browser as they are essential for the working of basic functionalities of the website. We also use third-party cookies that help us analyze and understand how you use this website. These cookies will be stored in your browser only with your consent. You also have the option to opt-out of these cookies. But opting out of some of these cookies may affect your browsing experience.
Necessary Always Enabled
Necessary cookies are absolutely essential for the website to function properly. These cookies ensure basic functionalities and security features of the website, anonymously.
Functional
Functional cookies help to perform certain functionalities like sharing the content of the website on social media platforms, collect feedbacks, and other third-party features.
Performance
Performance cookies are used to understand and analyze the key performance indexes of the website which helps in delivering a better user experience for the visitors.
Analytics
Analytical cookies are used to understand how visitors interact with the website. These cookies help provide information on metrics the number of visitors, bounce rate, traffic source, etc.
Advertisement
Advertisement cookies are used to provide visitors with relevant ads and marketing campaigns. These cookies track visitors across websites and collect information to provide customized ads.
Others
Other uncategorized cookies are those that are being analyzed and have not been classified into a category as yet.
SAVE & ACCEPT
Scroll To Top